Home
IT News
Who will win - Project Glass on Google or iWatch to Apple?

Who will win – Project Glass on Google or iWatch to Apple?

5-megapixel camera, 16 GB of internal memory and a full day’s work on a single charge of the battery are just some of the features that Google will try to win customers for its augmented reality glasses.

More coming conference Google I/O, which the company is expected to distribute to developers of its notorious “smart” glasses Google Glass, more details are known about the project. And although at the beginning of the year, representatives of the Internet giant announced the specifications of the gadgets inconclusive, Now obviously the specialists of the company are finally defined them. 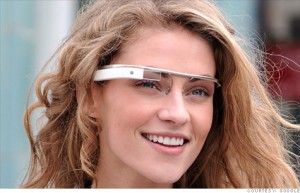 Това разбираме от official publication the social network Google +, according to Google Glass glasses must be suitable for all users – they can be adjusted flexibly to all types of heads, and the kit will be provided two additional pairs of nose pads of different sizes.

With its technical characteristics glasses will hardly get used to the modern smartphone users Zina amazement, but given the shape and mass-scale features of the device specs are still pretty interesting. The integrated display of the glasses as will be equivalent to 25-inch HD screen located at a distance of 2.5 m built-in camera can make 5-megapixel photos and record video at a resolution 720p. For audio playback does use a system based on the phenomenon of bone conduction.

Communication capabilities of Google Glass, limited to Wi-Fi 802.11b / g and Bluetooth. The total storage capacity amounts to 16 GB, but they available to the user will have only 12 GB, because the rest will be occupied for official purposes of the operating system and applications. The internal battery is not mentioned, but Google said it is enough for all day battery life of the device. Charging via standard microUSB port for this purpose are provided in sets and related accessories.

To work with GPS networks and SMS services, glasses must be connected to a smartphone running OS Android 4.0.3 or later, it is clear from official information. This is because on older platforms will not be able to run the application MyGlass, which is necessary for the interaction between a smartphone and Google Glass.