iWatch – the next big thing from Apple

While everybody is talking about TVs, I think the future has nothing to do with them.

Television is old technology, old way of viewing media. The new generation does not watch their favorite videos on a TV, it uses the iPad and smartphones instead. No need for cable TV music video – watch One Direction and Gangnam Style on YouTube. TV is not the future of Apple, because it’s too predictable.

On the other hand, the technology that we have right now – processors and resolution, has developed more than enough. I believe that the challenge in the future is the miniaturization of hardware rather than in larger displays and more cores in the CPU. In fact, it has always been this – Apple is one of the few companies that still believe in thinner and lighter design, where technology permits, they place impossible thin but super precision-made devices like the latest iPod touch, iPod nano and iPad mini. 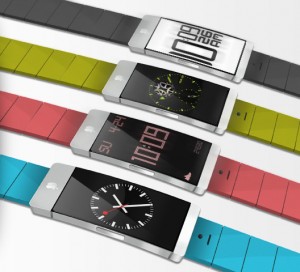 That’s why I think iWatch would be an interesting thing. Not as a handsfree accessory or iPhone, but as a separate, stand-alone device. Widget that you can use for video calls with friends, checking the time, location, shortcuts, even body temperature and heart rate at any time. “Smart Clock” with technologies like aselerometar and Siri. I even think that multitouch is not to be used anywhere and for each as if iWatch itself is operating system and interface, predictive yourself with the information you need, and show it at the right time (like Google Now). 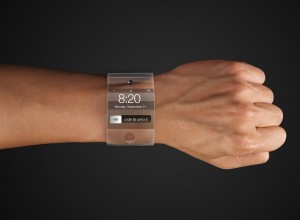 iWatch can be simplified version of the smartphone, but concentrated on the services that people actually use – voice and video calls over the Internet, iMessage, Twitter, Foursquare …

Initially, there may be some cultural and social disadvantages of such a device – the people are not used to talking to their watches … Yes, but they were not used to doing all these things done now on your phone. And nowadays, where you go, there are always a few people a fresh smartphone, staring at it for a minute … While the clock, a quick and natural look would be sufficient to get the latest information that they care about. I even think it will take less time and will look socially.

Imagine a “smart” accessory that you never miss or lose! 🙂

People say that Apple changed the phone forever, but Steve Jobs and company actually created a completely new product, putting it in a familiar package. Why not do the same with the clock?

What have these products together?

And “glasses” on Google, and the “clock” of Apple mask technologies under the appearance of old familiar things. Both companies aim to further facilitate users to be always online and connected to social media.